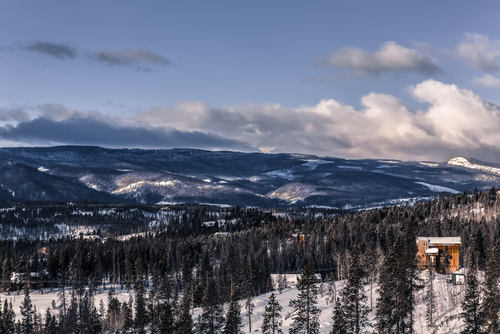 The snow-covered oasis of Winter Park is well known today for an atmosphere perfect for winter sports enthusiasts. Playing host to the ever-popular Winter Park Resort, this community is a not-so-hidden gem of the Rocky Mountains of Colorado. Like so many towns developed in the region, Winter Park has a long and storied history. Beginning far back and by another name, the allure has been present since its creation.

In 1932, sheltered against the western slope of the Continental Divide, a little establishment called Hideaway Park was home to 10 quaint tourist cabins popular with the fisherman and hunters of the area. Over time, the compact Hideaway Park doubled in its original population, building upon its 10 cabin fixtures to add a cafe and service station. In 1978, Hideaway Park was thoughtfully renamed, Winter Park. As business boomed, and population continued to grow, the town of Winter Park remained unique, charming, and true to its original beauty.

The Highest Incorporated Town in the U.S.

This town has seen its fair share of changes. From the changing of names to a series of settlements choosing to call it home; over decades of restructuring, it would become the highest incorporated town in the United States. Although this town still boasts its namesake, it isn’t technically the highest town in the Rockies, but it might be the most fun.

The mountain ranges surrounding the area where far too alluring for the residents of Winter Park to not use for their winter sports. As far back as the 1920’s, those who called this region their home used the natural slopes as their unofficial ski grounds. It wasn’t long before Colorado’s government saw the immense worth of the ideal natural environment and decided to begin drafting up for a future winter wonderland for all. With plans to build an activities playground, the creation of Colorado’s Winter Park Resort was off the ground.

The Winter Park Resort of Today

The official resort opened its slopes to tourists and residents as early as 1940, modestly sporting only a tie line to assist skiers up and down the mountainsides. Less than a century later, this resort has seen incredible growth and development. Winter Park Resort now contains seven separate sections, from hills for novice skiers to adrenaline packed slopes, there’s a something for anyone who pays this world-class resort a visit.

Fall in Love in a Visit

Full of history and life, the resilient nature of this town can be seen in its evolution, from its humble beginnings to its current reputation. Through the years, this small plot of land has become a haven for its residents as well as for those just passing through. Winter Park welcomes all that come to visit, whether they’re here to visit the resort, or to relax within the luxury mountain home communities. The history of this town has been passed down from generation to generation, and it will continue with stories of beautiful sights and impressive hospitality.